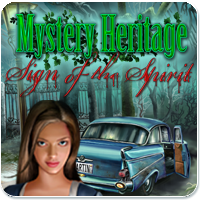 Investigate a mysterious and deadly curse! in Mystery Heritage: Sign of the Spirit! A recent death in the Williams family brings about rumors of an age old family curse placed upon them by a witch.

Was this death part of the witch’s revenge? You have been called in to investigate this and stop hysteria from reaching the rest of the town.

Was this death the result of the curse, or is it part of something deeper? Find out in this thrilling Hidden Object Puzzle Adventure game!

This is a special Collector's Edition release full of exclusive extras you won’t find in the standard version: