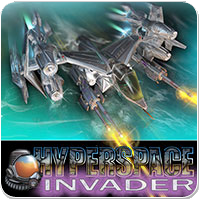 The game has changed and has become more breathtaking and vivid, yet the game play remains as interesting and absorbing as it was. This 3-d scrolling shooter allows you to try a profession of a military pilot, who flies a missile carrier of the latest design. Now, human race has reached the cutting edge of military aircraft design technologies, and the outcome of the battle depends only on your battle craft.

Your military spaceship can carry an entire arsenal of powerful weapons: the game features 10 types of primary weapons and 10 types of additional weapons, including bombs and homing missiles. You can open aimed fire on your enemy or commence scattered fire, so that alien spaceships will have no place to shelter. You can provide your spaceship with various kinds of ammunition, get 30 types of extra bonuses, but on one condition: you have no choice, but to get all this during the combat. For example, if you meet a traitor, you should kill him and in this case you will get his weapon. A variety of sly and treacherous enemies will stand in your way: 6 powerful bosses in 6 different locations await you. The path to glory is not a quick one: 30 levels, which teem with armed to teeth alien fighters, are not an easy road to go through. As you proceed to your destination you get more and more scores, which are taken into account at the end of each mission.

A pleasant point to mention is that the developers of Hyperspace Invader will not throw you into this bloodshed right at the very beginning. You can take a training course, which allows you to adapt yourself to the controls of your fighter. The inner organization of the menu provides for various options: you can select music, sounds, gamma, etc. The graphics of the game deserve a special praise for its comprehensiveness on the one hand and for opulence of special effects on the other. Hyperspace Invader is a good way to get fresh emotions. In this game world you can become a hero, who will do away with the confrontation between mankind and this hostile alien race, which has been continuing for years.